Real Madrid are well and truly into the business end of the season with 13 games remaining in LaLiga and their Champions League fate hanging by the thread. Carlo Ancelotti gives out his starting XI almost a couple of hours before every game, and it that hardly ever has any surprises or any elements of intrigue. The right wing was a position that saw frequent changes at the beginning of the season, but Rodrygo’s injury and Asensio’s (deceptive) form have put an end to that question as well.

Marco Asensio is Real Madrid’s third-highest scorer this season. This is a team, mind you, where Sergio Ramos and Casemiro were the second top scorers in previous seasons not so long ago. Asensio has scored nine goals this season — seventh in LaLiga — and one each in the Champions League and Copa del Rey. Three of these goals, however, came against Mallorca in one game. Asensio has played in 28 games this season. Despite scoring some ridiculous long-range goals, his goal contribution stands at an unimpressive 10.

Carlo Ancelotti has made it public that he is not going to change his 4-3-3 formation. Vinicius and Benzema are the team’s and the league’s two best forwards. They are undisputed. But despite scoring some fantastic goals this season, certain deficiencies in Asensio’s game have held the team back. Had Ancelotti been more flexible with his structure and formation, there were players on the bench who could have compensated for the things Asensio cannot add to his scoring. One might argue, well, what could be more important than scoring? Probably nothing. But when Asensio is not scoring he doesn’t bring as many things to the table as Eden Hazard does.

To show for G+A stats, Hazard has merely one goal and one assist this season so far. But despite being a player with no assurance of his preferred position and being out of the starting XI for almost the entirety of the season, Hazard has eclipsed Asensio in terms of build-up and combinations. Hazard’s pressing is not stellar, but Asensio is not great with his pressing either.

Hazard has been tried on the left, the middle, and on the right where he looked totally out of place. Asensio has mostly played on his preferred right wing with occasional central roles. Asensio has played almost double the minutes of Hazard but the Belgian still found a way to be more efficient in the final third when it comes to generating quality passes. 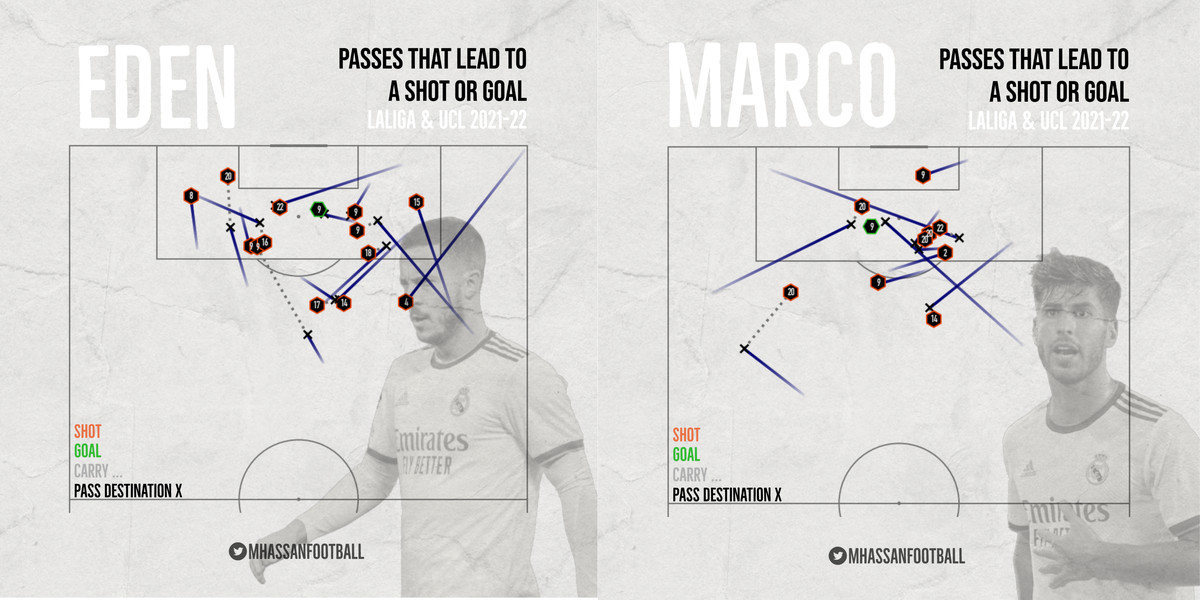 Benzema and Vinicius have contributed so much, so it’s difficult to replicate that level in the first place, but with a drastic dip in ability and efficiency of the third member of the trident, Real Madrid will keep suffering in difficult situations. For example, in the Premier League, Liverpool’s first choice forwards Diogo Jota, Mohamed Salah, and Sadio Mane have npXg numbers of 13.1, 12.7, 12.6, respectively this season. It’s a three-headed juggernaut. For Real Madrid’s forwards Benzema, Vinicius, and Asensio, the numbers are 10.6, 9.6, 5.2. The wedge created on the right is brutal.

The issue with Hazard and Asensio is that neither can claim they are the definitive best fits to fill the trio alongside Benzema and Vinicius. Asensio lacks creativity but grabs the odd goal. Hazard can bring the creativity but he has lost his scoring boots. A solution to this could have been better management of gametime. Ancelotti’s rotation and substitution schemes have been far from ideal. Despite having a good lead over Sevilla, the league is potentially set for a close finish given how Real Madrid have been showing signs of predictability and fatigue. If Real Madrid do not want to leave a hole in their frontline, better resource management has to emerge.

admin - May 29, 2022 0
Jurgen Klopp knows it’s hard to see the bigger picture in the aftermath of the Champions League final defeat, but this season deserves celebrating...