In a match that felt like a measuring stick for where Inter may be this season, it seemed that the home team would pull out a result after a gritty and impressive performance. Though it is only the first matchday, a point against Real Madrid would have gone a long way in securing Inter a spot in the knockout rounds after Shakhtar Donetsk’s loss to Sheriff Tiraspol in Moldova. Despite all the hard work put in by Inter for 89 minutes, they were undone in the final minute by a clever piece of linkup between youngster Eduardo Camavinga and Rodrygo as well as a goalkeeping clinic from Thibaut Courtois. Like we seem to say after every Inter match in the Champions League, Inter deserved more, but could not get the goal they needed.

Simone Inzaghi picked the same team he has been going with so far since taking the Inter job. The only difference was bringing back the fatigued Alessandro Bastoni, who recovered from overuse on the international break just in time for the match. All rumors of a Lautaro- Correa partnership were dispersed as Inter’s number 10 played alongside Edin Dzeko.

Real Madrid came into the match with a handful of injuries. Crucially, they landed in Milan with Toni Kroos, Marcelo, and Ferland Mendy unavailable. Gareth Bale and Dani Ceballos also missed the match with injury for Carlo Ancelotti’s team.

Inter kicked off the match looking like a completely different team from the one that slunk to a 2-0 home loss against the same opposition last season. Both Lautaro and Dzeko forced saves from Courtois early and often in the first half. Only brief surges from the visitors got the ball out from their own end to take pressure off of Courtois and his defense.

This was not Antonio Conte’s Champions League approach at all. Inter played an extremely high line and put the pressure on the Madrid players from the moment of possession being lost. When Inter did have to defend, Bastoni and Milan Skriniar kept the speedy Vinicius at bay. Stefan de Vrij kept Karim Benzema quiet through the middle, which is no easy feat. On the occasions Inzaghi’s team lost the ball, Marcelo Brozovic recovered well to ensure the home team were not caught out on the break. Brozovic and Nicolo Barella controlled the midfield and really helped Inter pin back Madrid for long stretches of the half.

Very little criticism could be made of Inter’s first-half performance. All the home team needed to wrap up a comprehensive performance was a goal. When the goal did not come, uncertainty began to arise about whether or not it would, and if one would come before Madrid found one.

At the second-half kickoff, Madrid attempted to take on the impetus and take the wind out of the Inter sails. They managed to push on early in the half before Inter took the ball right down the field and put a big chance on goal from Dzeko that Courtois was equal to. The rebound then fell to Skriniar who battled hard with three Madrid players in the box, but could not get the shot away from close range.

Inter remained on the front foot, but could not find a breakthrough. Inzaghi threw on a couple of proactive subs in bringing on Federico Dimarco and Denzel Dumfries for Ivan Perisic and Matteo Darmian just ten minutes into the half. While the subs did make Inter a bit more dangerous going forward and on set pieces, they did lose some defensive solidarity given to them by the two starters.

As the match wore on, it became an increasingly back and forth affair. It began to feel as if it was on a knife’s edge as Joaquin Correa and Arturo Vidal replaced Lautaro and Hakan Calhanoglu. These changes, intended to grab the midfield and threatened the Madrid defense, made the match even more of a 50/50 affair. It became clear that Inter would be looking to hold onto a draw. It seemed to be in hand as Skriniar tried to singlehandedly drag Inter over the finish line with a massive block with three minutes left in the match.

The draw was lost with only a minute left to make it to the finish as Madrid substitutes Camavinga and Rodrygo got the best of Inter substitute Matias Vecino and linked up for Rodrygo to slot past Samir Handanovic and silence a rocking San Siro. Extra time was a non-factor, forcing Inter to leave empty-handed after a seemingly promising performance. 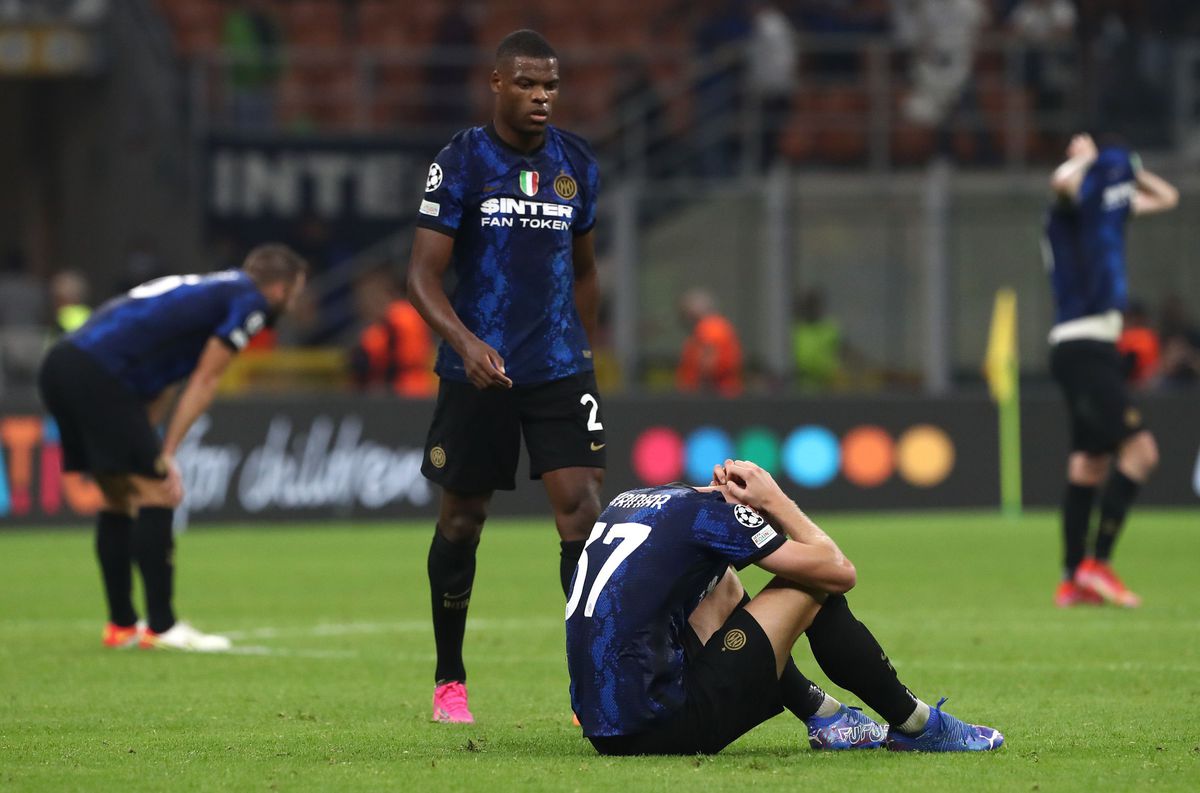 Handanovic – 5.5: Looked a little shaky early in the match but did not have much to do through large swaths of the match. The goal was not his fault and he made a decent save, which is about as much as we can ask of him these days it seems.

Bastoni- 6.5: Made his presence known early against Vinicius, who decided it would be better to go at Skriniar. He did not have much success there either. His presence was sorely missed on Sunday.

de Vrij – 7: Absolutely shut down the center of the attacking third. We barely heard a peep from Benzema all match. The Dutchman deserves a lot of credit for that.

Skriniar – 7.5 (MOTM): Monstrous performance for Inter’s Milan. Inch perfect blocks and tackles all over the place. Not to mention a threat in front of goal. If anyone deserved a result from the match, it was him.

Perisic – 6: Did well in keeping the left quiet in defense and went forward well. Inzaghi gambled that Dimarco would have a bigger impact, but maybe leaving on Perisic would have been a better option structurally.

Calhanoglu – 6: Gets a ton of heat from fans already, but he did not really do anything wrong. Only true misstep was not locating Lautaro in a 2v4 break. Needs some confidence.

Brozovic – 7: Brozo generally steps it up in the big matches. This was no different. Great in attack but especially in defense. His presence as the deepest midfielder in attack really makes him crucial in recovery when the opposition gets the ball. This role will be crucial as Inter transition into Inzaghi’s higher line.

Barella – 6.5: We are truly spoiled by the quality of Nicolo Barella. He could put in an impressive performance with his eyes closed. Coped very well with a midfield full of Champions League experience.

Darmian – 6: Very reliable, but his lack of pace compared to last season’s number two and this season’s number two really hindered Inter in attack when it could have been the difference maker. If only we could combine the experience of Darmian and the pace of Dumfries into one player.

Dzeko – 6: A great player, but he cannot play all these minutes at his age. The more time that goes on without a break, the more he looks like a lamp post. Not his fault, but still frustrating.

Lautaro – 7: As good of a performance that can be had without a goal contribution. Pressed well, won the ball, and got into dangerous positions. If Courtois was not on the very top of his game for this match, we would most definitely be talking about a man of the match performance.

Dumfries – 6: A good showing going forward, but he seemed very lost in defense. Much like Hakimi in his early Inter career. Still some work to do for the Dutchman before he makes that position his own. Made an impressive recovery tackle on Casemiro. There is promise, it’ll just take some time.

Dimarco – 6: Looked out of his depth in his first Champions League appearance. Looked decent going forward but could not quite keep up in defense. Understandable given the circumstances, but maybe should not have been put in such a situation.

Correa – 6: Came on to provide a direct threat, but barely got on the ball. Had 11 touches and only attempted one dribble. Not what you need when chasing a goal. Likely would have linked better with Lautaro than Dzeko.

Vidal – 6: Did some of the dirty work in midfield, but did not provide the same creative threat that he did in the first two matches of the season. Could have done better, but was not at fault for the goal.

Vecino – 2: As someone who came into this season with hope for Vecino, this is disappointing. Got absolutely washed by 18 year old Camavinga, a guy nearly half his age. Could not contain him in the midfield and then lost him on the goal. Terrible appearance. Maybe there’s a position for him in the team, but it’s not coming on in the place of Barella.

Inzaghi – 5: Spot on tactics in the first half, ruined by some gung-ho substitutions in the second. He can’t go onto the field and put the ball in the net himself, but he also can’t throw the entire team structure away searching for that goal. Big learning moment. 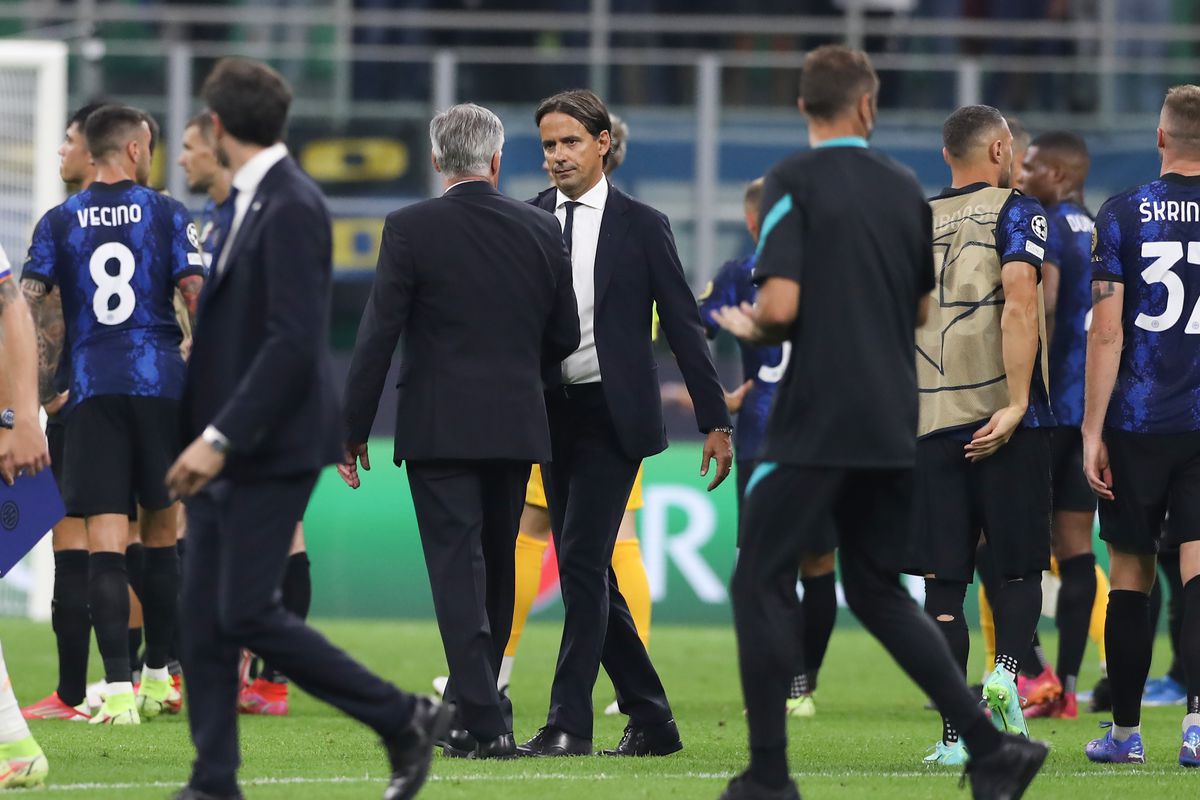 A tough result in the Champions League, but not one that Inter can allow to bleed into their Serie A performances. Next up is a home match against Bologna on Saturday. If Inter come out with a performance like the first half again on the weekend, they will claim a win that will help get everyone’s heads back on straight.

Real Madrid not expected to bid for Erling Haaland – report

admin - September 9, 2021 0
Real Madrid have announced the extension of Dani Carvajal’s contract, which was set to expire in 2022. Carvajal will now stay at...

Club members, Madridistas and the general public can buy tickets for...